r
Standford, CA—On June 19, the MIT/Stanford Venture Lab (VLAB) invited experts from the rapidly growing niche of "crowd funding" to join a panel discussion with MIT/Stanford alumni-turned-entrepreneurs at the Stanford University campus. Crowd funding is a fund-raising method by which a project, cause, or business is funded through the collective efforts and contributions of a group of people, whose participation is often (but not always) enlisted via an online network.

The MIT/Stanford VLAB, which hosted this event, is a non-profit organization that aims to promote the growth of hi-tech entrepreneurial ventures by providing forums for technologists, inventors, capitalists, and industry experts to network and swap ideas and information on growing hi-tech ventures in a dynamic fast-changing world. 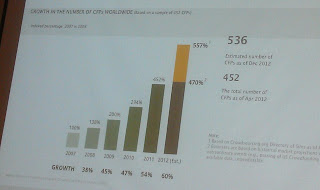 The panelists’ talks centered on how a $1 contribution can be used to create big business through crowd funding. For instance, IndieGoGo and Kickstarter were able to fund a whopping 60,000 projects using this method, with 50% of the funds coming in from donations while the other 50% was received in exchange for future products or creative rewards.

The biggest questions asked during the discussions were whether crowd funding will complement or consume the existing models of capitalism, what effect will come from giving equity to individual consumers, and whether venture capitalists will be turned off to start-ups if the latter had relied on crowd funding in the early stages of their growth.

One thing’s for sure: As the 2012 JOBS Act now allows startups to receive up to a million dollars of cash in exchange for equity per year, the crowd funding trend is gaining even more speed, working its way into social networking sites and fueling the advancement of a new type of economy.

Posted by Blessie Adlaon at 4:00 AM